Lakes Area Montessori Center was founded in 1979 in a specially constructed building on two acres of land with a beautiful natural preserve in the backyard. The school building received the Commerce Township Beautification Award in 2003.

The school was also awarded a Congressional Recognition Certificate by U.S. Congress and a Certificate of Special Tribute by the State. 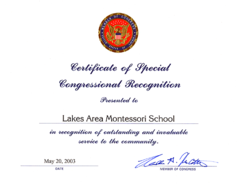 Our very own Lakes Area Montessori Teachers Make a Difference...